Watch the following videos of the surgeons preoperative plans for the case. Compare their findings with your own analysis.

My name is Dr. Steven Gallinger. I'm Professor of Surgery at the University of Toronto. With interest in hepatobiliary and pancreatic surgery. This patient, with an unusual stricture in the head of the pancreas that we actually investigated about 12 years ago when she presented with pain and these unusual imaging findings. 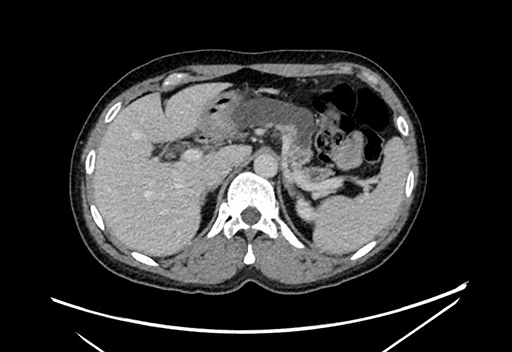 There was no specific etiology that we could determine and despite extensive imaging endoscopic ultrasound, attempts to dilate the stricture and it seemed benign we pretty much ruled out malignancy. And at that time, we were considering either a Puestow operation or a Whipple operation. Her pancreatic duct was not that dilated and but she was having pain.

And I can show you her CT scan at that time. Her pancreatic duct was definitely very dilated but smooth walled. You can see it over here. It's pretty big. It's very big. And then it comes down to an abrupt ending in the head of the pancreas with no lesion noted and certainly over time it's been proven, really just on the basis of time, that there's really nothing in the head of the pancreas from a neoplastic point of view because the patient actually refused surgery and was lost to follow-up for quite some time. But then came back just this year, which is ten years later, with further abdominal pain and more impressive imaging that you can see here. 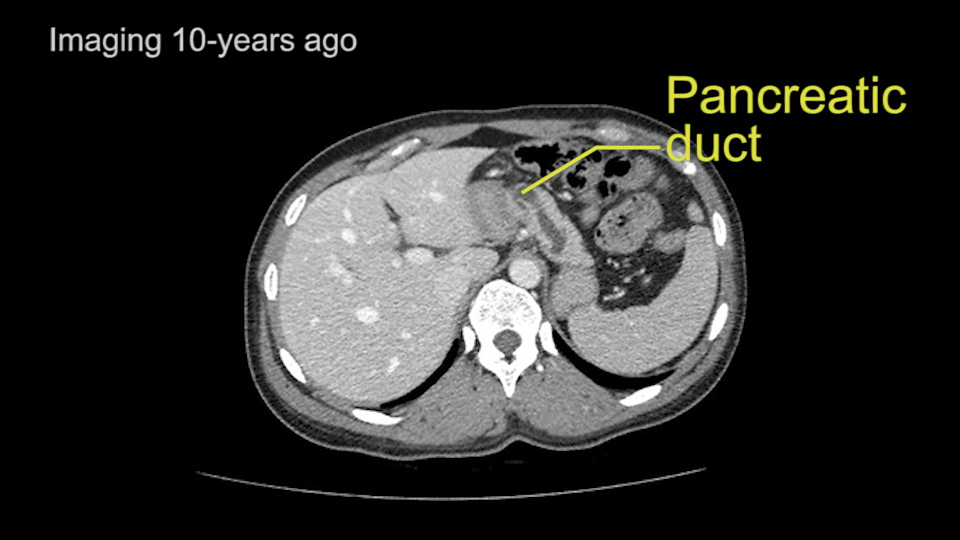 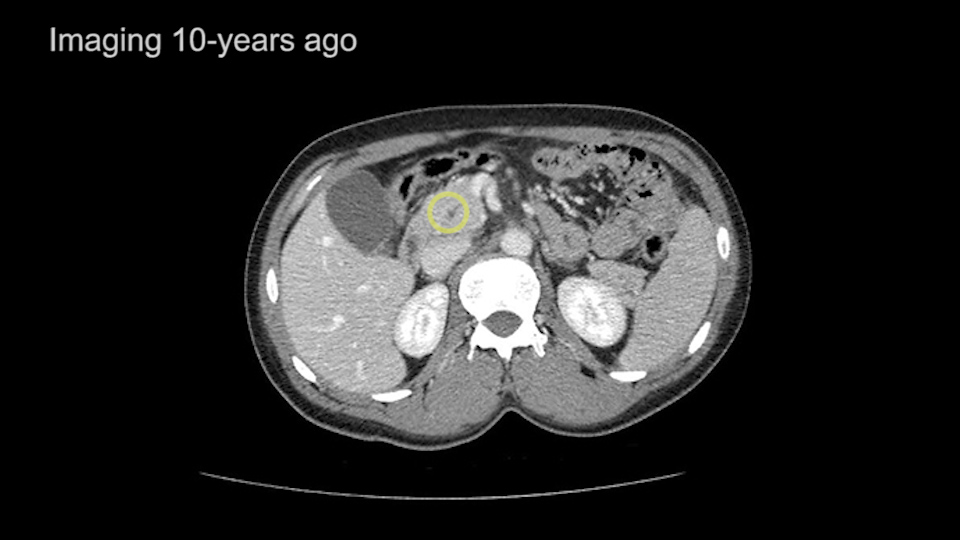 Her pancreatic duct was enormous. I've actually never seen a duct this size. Certainly something that you might see in cancer of the pancreas but not to this degree. And here's her pancreatic duct. It's a good two or three centimeters. It's as big as the vena cava or even bigger. Again, tapering down to a complete abrupt ending or beginning here in the head of the pancreas with no lesion. 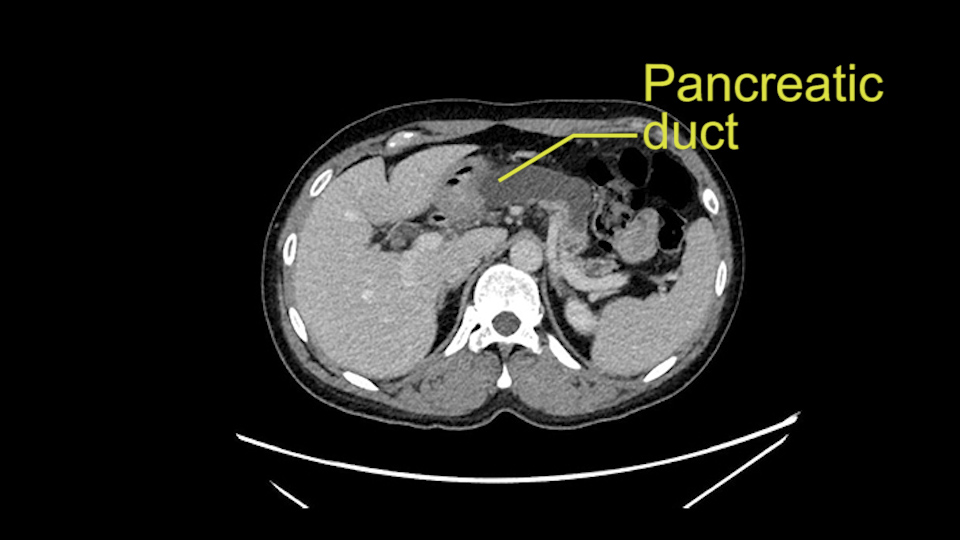 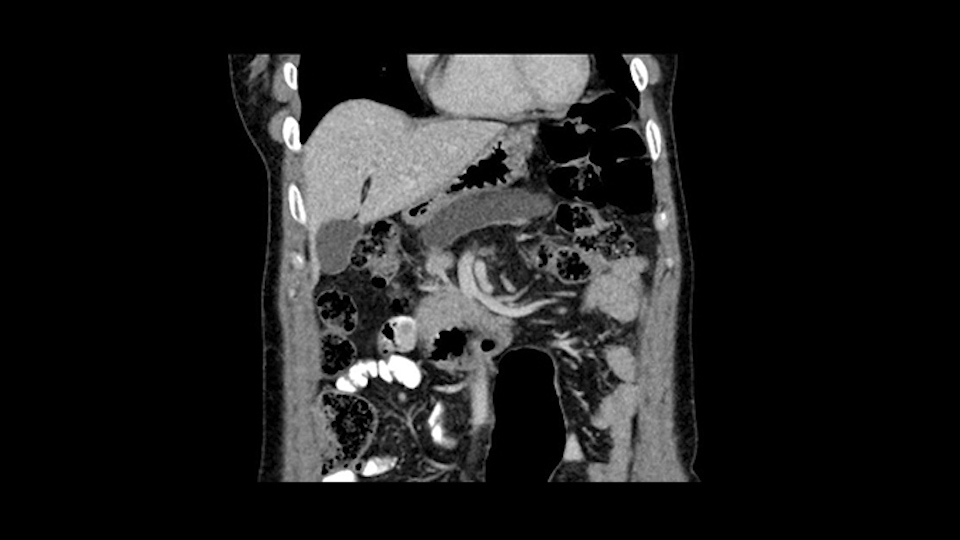 So because she's been having pain, because she'd been lost to follow up, because we really are convinced there's no neoplastic problem, we advise the Puestow operation which will be a lot easier and with less morbidity. The Puestow operation is an old operation that is not done that much anymore. It's used primarily for patients with chronic pancreatitis and pain, usually with stone disease. This patient does not have any stone disease and it's really a lateral, usually side-to-side pancreaticojejunostomy on to a Roux limb.

The nuances of the operation are not that difficult, especially in this case. In other cases, where there is stone disease sometimes there is a challenge in opening up enough of the duct, we usually call it filleting the duct, like opening it. The anatomic issues are not usually a problem unless the duct is not that large and it can be a challenge to find. There aren't that many anatomic areas of concern or injuring structures. I suppose if you got into the wrong planes you could be behind the pancreas or beside the pancreas and injure the splenic vein or splenic artery, certainly have to consider the duodenojejunal flexure, the ligament of Treitz whenever working in this area. And in the operating room, obviously, the first slowing down moment is finding the duct, opening it up and then thinking about what's inside this duct. And have you opened it up adequately but otherwise there aren't a ton of slowing down moments in this sort of procedure. 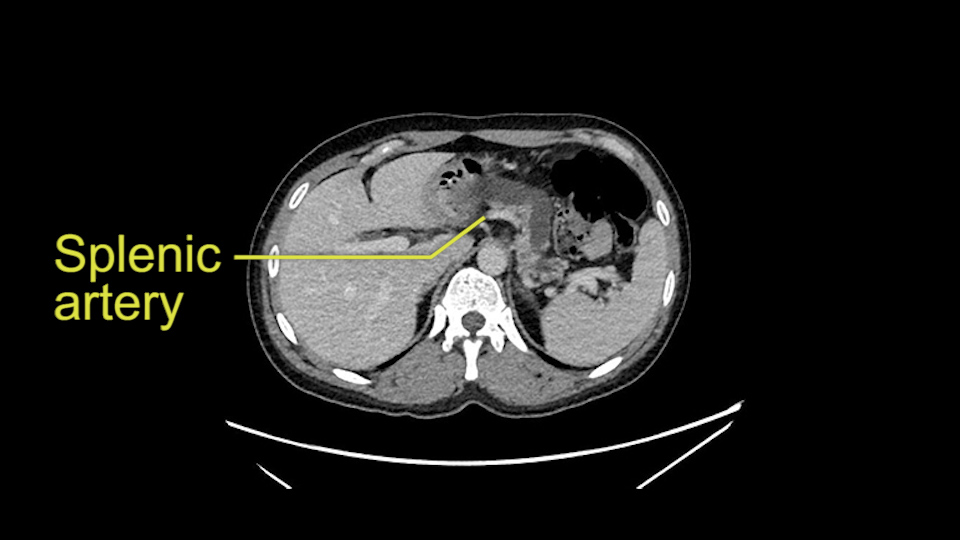 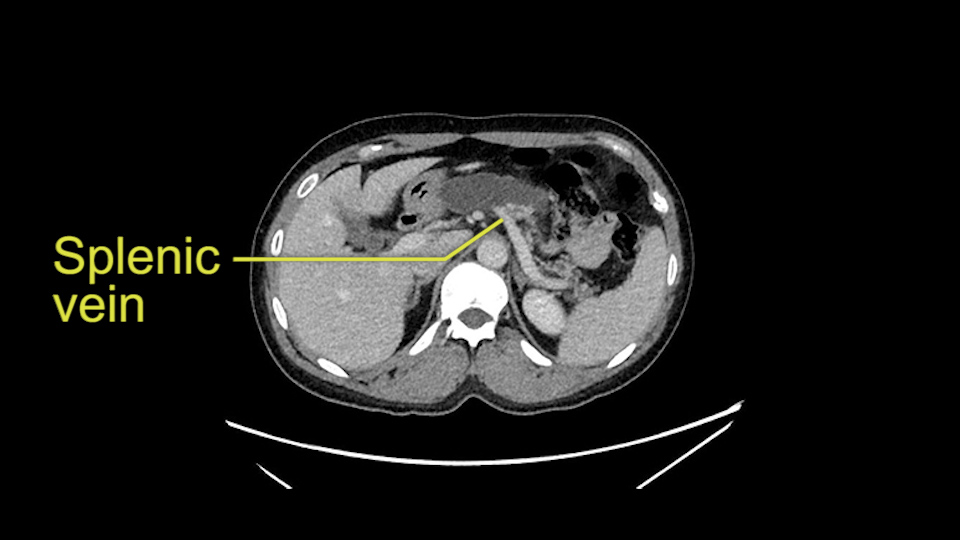 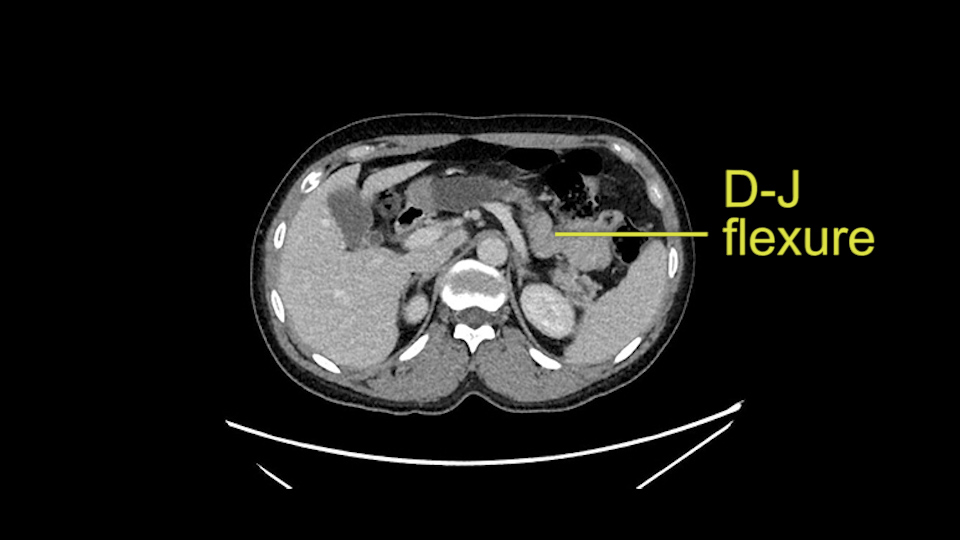 My name is Paul Greig. I'm a Professor of Surgery here at the University of Toronto and today we're discussing the surgical considerations of a Puestow, pancreaticojejunostomy. The patient is a 44 year old individual with longstanding dilatation of the pancreatic duct to a point of a stricture in the head of the pancreas. A couple of issues as we address the imaging we want to look carefully and understand the pancreatic anatomy, the ductal dilatation, the stricture; interrogate the stricture carefully to see if there is evidence of malignancy and in the absence of such, consider a drainage procedure.

The liver is normal and we note no evidence of bile duct dilatation. So the process in the pancreas is not obstructing the duct. There's a soft tissue density up along the aorta up the spleen. Come down to the pancreas there's a marked dilatation of the pancreatic duct. We know this is longstanding. We've reviewed the imaging from a decade ago and this duct has always been dilated. It's 2.7 cm in cross-sectional diameter in the mid portion of the pancreas. This dilatation goes right out to the tail of the pancreas. There's a little more pancreatic parenchyma out here in the tail. There's considerable atrophy through the body and as we follow this dilated duct into the head of the pancreas, course around the duodenum here. Here's the duct and then it stops. So this is the stricture. We're looking at the stricture. We see no stones obstructing the duct and we do not see a tumor in this area. Knowing that this patient's had ductal dilatation for a decade now, we're quite confident the patient does not have a neoplasm or a malignancy. We can see Wirsung, a normal small duct of Wirsung coursing down through the head of the pancreas and to the Ampulla of Vater. So the abnormality we see is an isolated pancreatic duct to a stricture in the head of the pancreas. 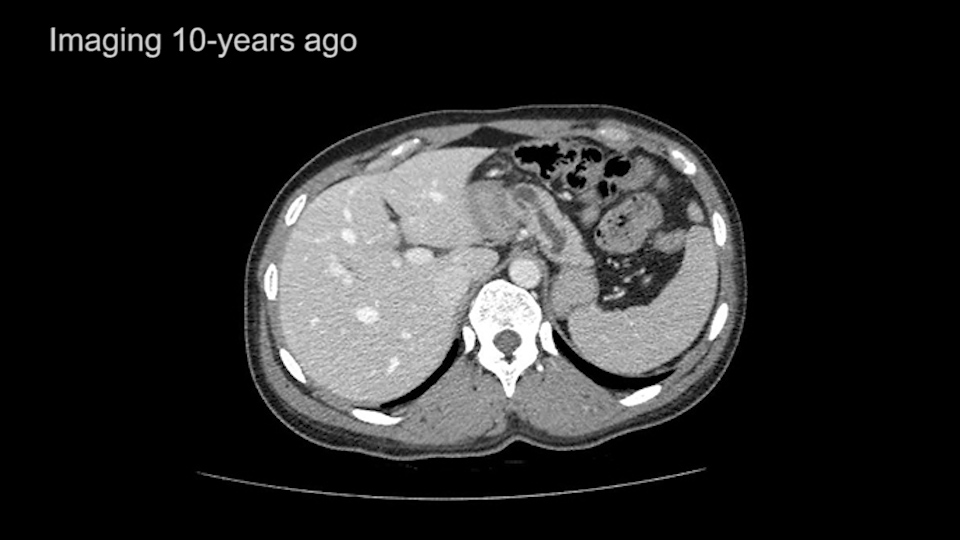 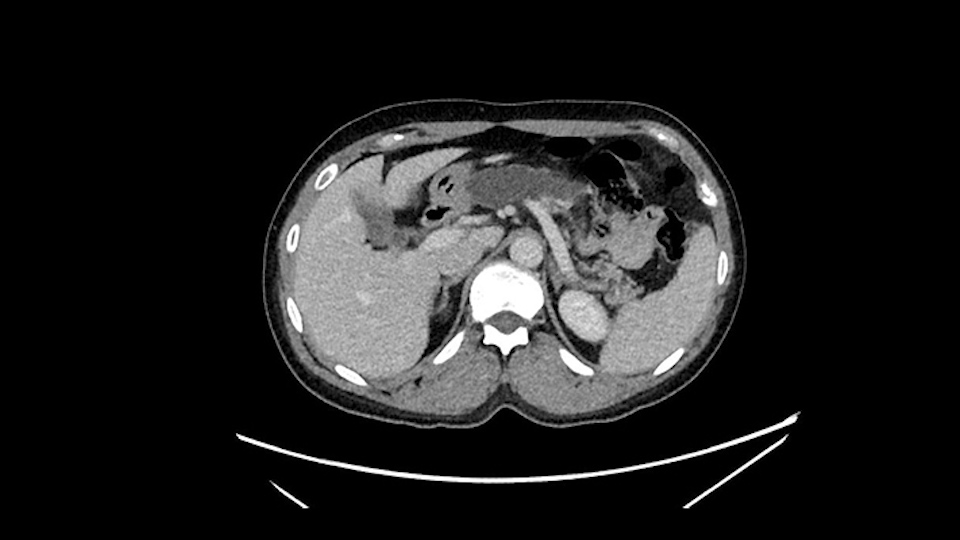 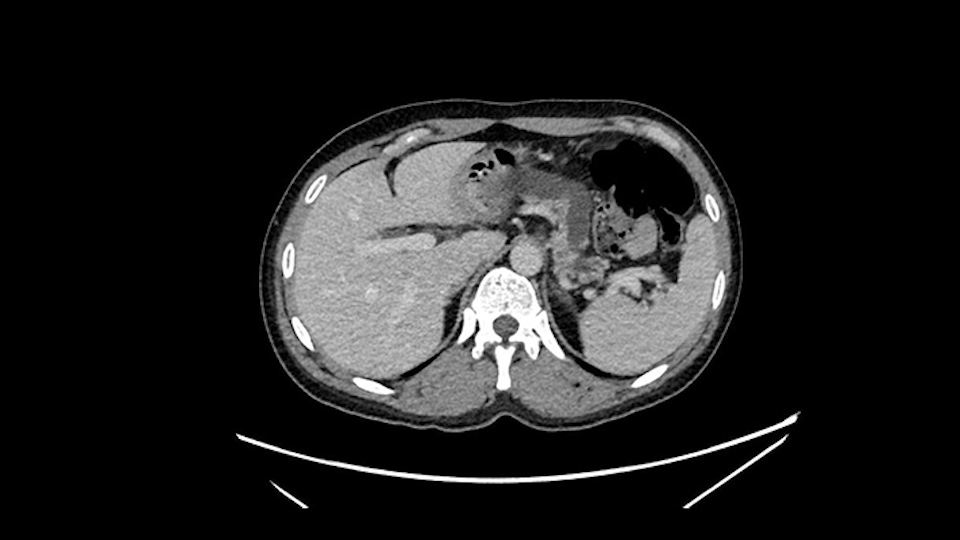 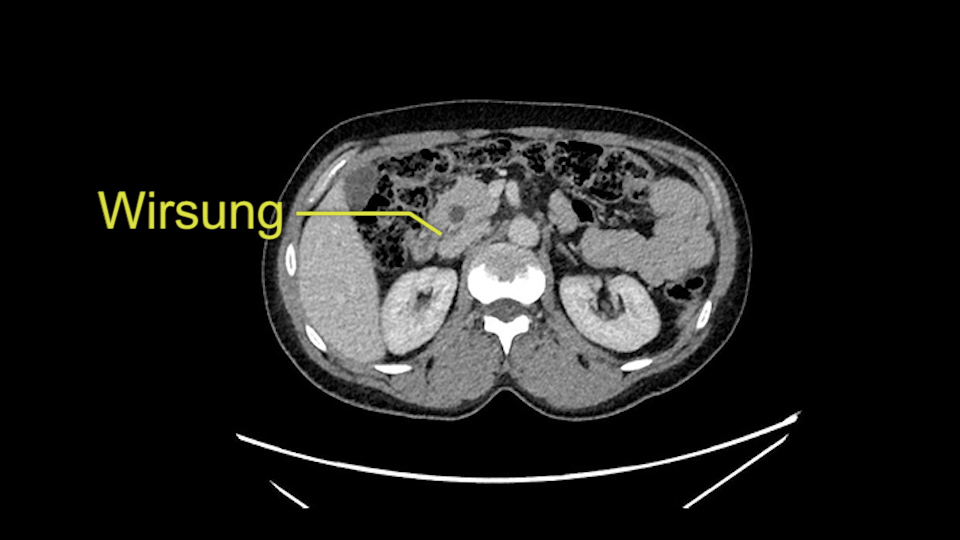 Considering a Puestow procedure, we want to look at the relevant anatomy and in particular the vascular anatomy. The portal vein and SMV are normal. The splenic vein is normal. There is no evidence of splenic vein thrombosis. There's no collaterals. So we don't have to worry about portal hypertension. We note the left gastric vein courses up beside the stomach so that’s intact. So the anatomy here is very conventional. This is the GDA here, the gastroduodenal artery which will be a landmark at the time of surgery. Relatively thin individual as patients with chronic pancreatic disease often are. 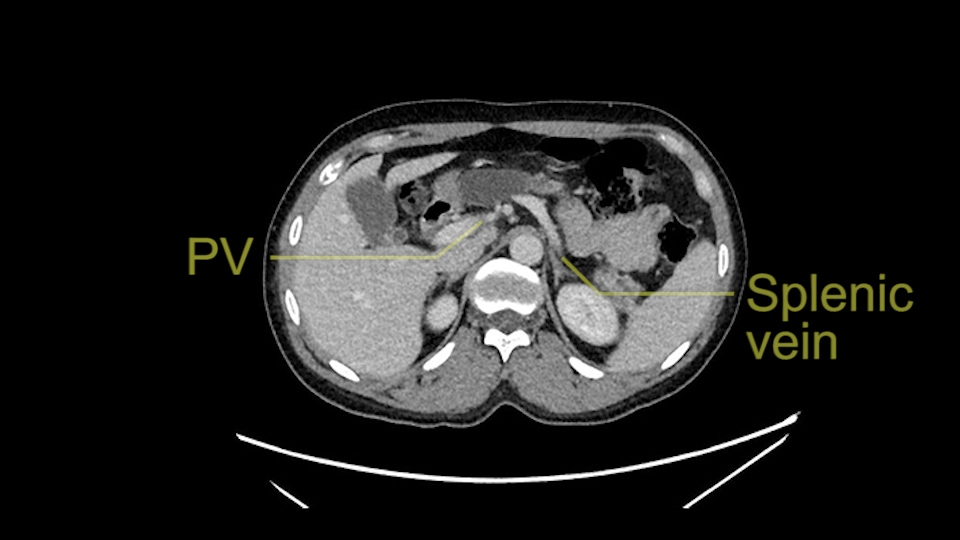 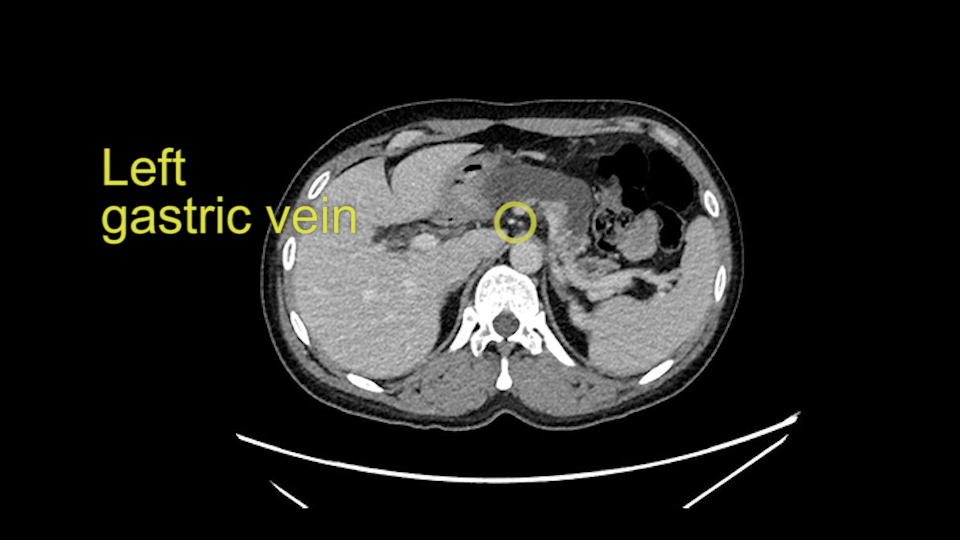 So the operation can be approached a number of ways I would use a midline, a limited midline incision. Divide the falciform ligament to reflect the liver cephalad a little. Divide the gastrocolic omentum, taking care to keep the gastroepiploic vessels on the greater curve of the stomach and open a large window into the lesser sac. 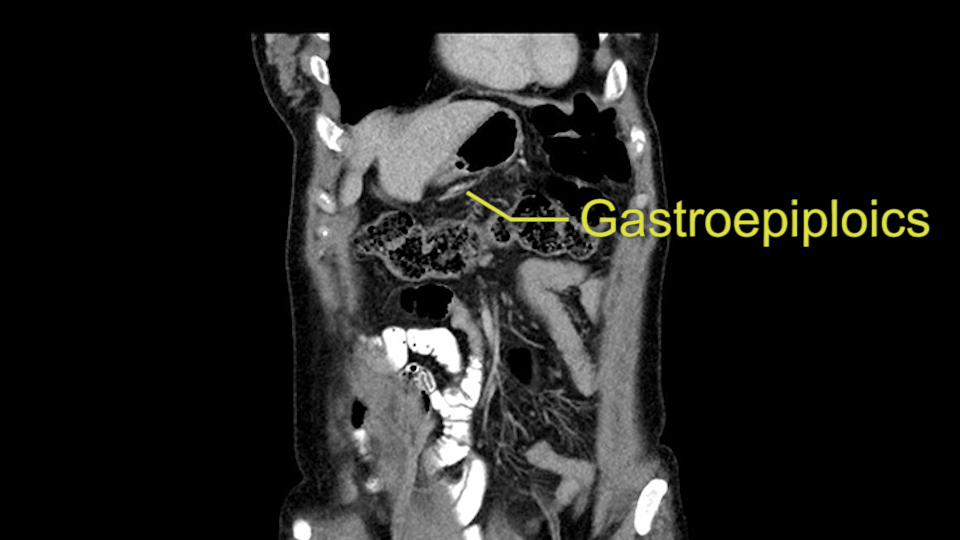 I would anticipate that there will likely be adhesions between the posterior wall of the stomach and the front of the pancreas, take those down so that we can well see the entire front of the pancreas. With the proper retraction then we can place a retractor to hold the stomach cephalad, the colon inferiorly, then we would assess the pancreas once again with an intraoperative ultrasound. I think the duct will be readily palpable but we'll just confirm it with the ultrasound. We'll want to interrogate the head of the pancreas. I should just comment that we'll want to take some of the reflections of the stomach off the head of the pancreas because we want to get well down to the origin of the stricture or the stricture itself. We'll want to interrogate that with the ultrasound and I would anticipate that that there would be no obvious parenchymal abnormality in that area. We then set to open the duct. It's likely one could just palpate it in this size right down on the duct I would anticipate that the pancreas over the duct would be very atrophic. If there's any question at all, one can put a needle directly into the duct. And once the crystal clear pancreatic juices is seen, then cut down on the needle to get into the duct. The important considerations in a Puestow is to make the duct incision very long. You don't ever want to be in the situation where you've done the Puestow and the anastomosis is very small and it goes and strictures down because a redo Puestow is really difficult to do. So we would fillet that duct right over to the head of the pancreas. We would anticipate knowing that Santorini is not involved that we're not going to need to do a Frey type of procedure and core out the parenchyma between a dilated Santorini and Wirsung because the stricture doesn't require that. And important to take it well out into the distal body or tail of the pancreas. Once we've done that, the duct is wide open. It's now time to do the Roux loop. Reflect the colon up, identify a point of the jejunum so that the mesenteric leaf would be long enough to be brought retrocolic up to the pancreas. Divide the bowel, do the enteroenterostomy and then bring the distal loop through a retrocolic defect in the mesocolon and lay it adjacent to the pancreatic duct. Important to have the full length of the jejunum lying there, big long jejunotomy and I tend they can be sewn together a number of ways. I tend to use absorbable sutures. Probably a 4-0 Maxon or PDS and I tend to do two layers if I can. I would like to do a seromuscular layer to the capsule posteriorly and then the mucosa to mucosa suture can be a running stitch, taking care to make sure that the corners are well taken care of and then the anterior row can be done running and then a second layer either interrupted or running to complete the anastomosis.

Important to close the defect in the transverse mesocolon so the bowel doesn't herniate up, simply close. Not anticipating any particular anomalies. I guess the gastroduodenal artery would be a structure we're identifying as we're ensuring that the pancreatic duct is well opened right over to the stricture area. So the consideration of a Puestow lateral pancreaticojejunostomy is entirely appropriate. The patient is symptomatic and surgical considerations are appropriate.

Acknowledgements
Thank you to the HPB Surgeons who contribute their time and expertise. This content is made possible through educational grants from:

Views and opinions expressed in all videos and module content are those of the individual surgeon and solely intended for surgical education purposes. We do not endorse any product, treatment or therapy.